As of August 11, 2021, George Mason University will require all individuals on our campus to wear masks indoors, including classrooms and laboratories, regardless of vaccination status. For more information, please see Mason’s updated mask policy.

Head in the Clouds

With its clever comments on current politics and societal trends, as well as its delight in putting caricatures of celebrities onstage, Athenian Old Comedy can be regarded as The Simpsons of its day. In one of the few extant plays, Aristophanes’s The Clouds (first performed in 423 BC), the philosopher Socrates is the main target of ridicule. When a stupid farmer visits his ‘Think Tank’ in order to learn how to lie persuasively, Socrates descends from above in a basket, where he had been examining the sun and the ether. As it turns out, the famous thinker lives with his head in the clouds, wasting most of his time on such trivialities as measuring how far a flee can jump in flee-feet and why a gnat produces a buzzing sound. More serious, however, is that he denies the existence of the gods and undermines traditional values with his faulty rhetoric.

In 399 BC, a court would condemn Socrates to death for impiety and corrupting the Athenian youth – two of the main accusations levelled against him in the Clouds. It is small wonder, then, that Plato held Aristophanes in part responsible for the philosopher’s downfall.

“Oh, men of Athens, what a vile monster is the calumniator, gathering malice from everywhere, always backbiting! But this fellow is by very nature a spiteful animal, absolutely incapable of honesty or generosity; this monkey of melodrama, this bumpkin tragedy-king, this pinchbeck orator!” Thus spoke the famous Greek orator Demosthenes, facing his rival Aeschines at court. The eloquent Athenian pulled all the stops, accusing his opponent of slander, scandalous living and, above all, betraying his country to the Macedonian conqueror Philip II.

At stake was not money or power, but honour: Aeschines sought to deny Demosthenes the golden crown with which the Athenians wanted to reward his services to the state. However, Demosthenes triumphed and Aeschines was fined, going into exile to lick his wounds.

In ancient Rome, prominent individuals could fall victim to the ultimate punishment of damnatio memoriae, a curse on their memory by senatorial decree. One famous victim was the short-lived emperor Geta (r. 211), whose statues were smashed and whose name was removed from inscriptions and documents after he had been murdered by his brother and co-ruler, Caracalla. Even a tondo from Egypt, showing the imperial family in happier days, sports a conspicuous gap where the face of the young ruler used to be.

When King Xerxes (r. 486-465 BC) brought down the military might of the Persian Empire on the independent city states of ancient Greece, he expected a quick and decisive victory. Instead, he suffered a crushing defeat. In Greek eyes, he became a prime example of hubris, the arrogant pride which drives humans to strive for things beyond their grasp and leads to their destruction.

According to one famous story, told by the Greek historianHerodotus, a storm destroyed the bridge that the Persian king had built to cross the Hellespont. In a rage, Xerxes commanded his soldiers to punish the water with three hundred lashes. While doing so, they had to say: “Bitter water, (…) Xerxes the king will pass over you, whether you want it or not; in accordance with justice no one offers you sacrifice, for you are a turbid and briny river.” From such foolish and offensive behaviour, it was clear that Xerxes’s campaign was doomed before he had even left Asia.

• Nicolas R.E. Fisher, Hybris: A Study in the Values of Honour and Shame in Ancient Greece (Warminster 1992)
• George Cawkwell, The Greek Wars: The Failure of Persia(Oxford 2005)
• Emily Baragwanath, Motivation and Narrative in Herodotus (Oxford 2008)

“Other animals become sated with venereal pleasures,” Pliny the Elder remarked in his Natural History; “man hardly knows any satiety”. As a case in point, he told a story about Messalina, the wife of the Roman Emperor Claudius, who challenged a prostitute to a contest in sexual stamina, “and outdid her, after continuous intercourse, night and day, at the twenty-fifth embrace”.

The historian Tacitus and the biographer Suetonius tell similar tales about the empress’s rampant sexual behaviour, portraying a woman who was completely out of the control of her imperial husband. Messalina was eventually executed after Claudius found out that she had married another man and was plotting to overthrow him… At least, that is the story preserved in the ancient sources. Whatever the truth may have been, Messalina was certainly described in the blackest terms possible by male authors who abhorred independent-minded women with desires of their own.

Ambitious, talented and handsome, the general and politician Alcibiades was a striking figure in fifth-century-BC Athens. He played a key role in the Peloponnesian War (431-404 BC) between his home town and its long-standing rival, Sparta. Alcibiades’s anti-Spartan agenda led to fierce political disagreements with some of his fellow citizens. In 415 BC, when he was about to set out on a military expedition to Sicily, his opponents accused him of sacrilege, holding him responsible for the mutilation of statues of the messenger god Hermes.

The general wanted to stand trial immediately to clear his name, but was not allowed to do so. After he had set sail, his enemies accused him of other sacrilegious actions and even claimed that he wanted to overthrow the Athenian democracy. Without a chance to defend himself, Alcibiades was condemned to death and had to spend several years abroad before the verdict was revoked. After his return to Athens, he regained a leading position, but his enemies soon struck again, blaming him for the naval defeat of one of his subordinates. Once again, public opinion turned against Alcibiades. He was relieved of his command and had to leave the city – this time for good.

Fiddler on the Roof

When fire destroyed great parts of Rome in AD 64, many citizens suspected Nero as the arsonist, since the emperor used much of the newly available space to build a lavish palace. Rumours floated that the notorious ruler had watched the flames with great delight from the roof of his palace, singing the “Capture of Troy” in his lyre-player’s costume to celebrate the occasion. The scene was immortalized by Peter Ustinov in the Hollywood blockbuster Quo Vadis (1951). Nowadays, the notion of “Nero fiddling while Rome burnt” is regularly referenced in political cartoons, even though the authenticity of the story is highly questionable and fiddles had not even been invented yet in Roman times.

“When, O Catiline, do you mean to cease abusing our patience?” Cicero thundered in the Roman senate in 63 BC. The words were followed by a spectacular speech, in which the consul heaped abuse on his fellow senator Lucius Sergius Catilina, who was suspected of plotting against the state. Cicero painted his victim as the axis of a conspiracy attempting to overthrow the Republic, slandering him for his treacherousness and decadent lifestyle. Catiline, who was present on the occasion, tried in vain to protest, but the senators had been so riled up against him that he was forced to leave the meeting and later fled the city. 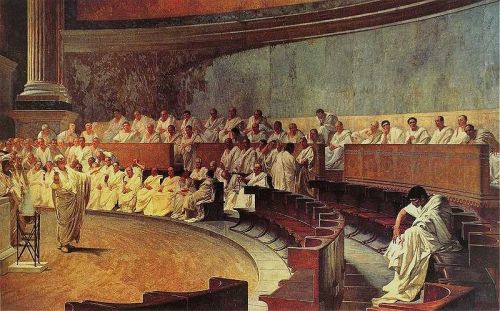 The Crimes of Elagabalus

The Life and Legacy of Rome’s Decadent Boy Emperor

Elagabalus is one of the most notorious of Rome’s ‘bad emperors’: a sexually-depraved and eccentric hedonist who in his short and riotous reign made unprecedented changes to Roman state religion and defied all taboos. An oriental boy-priest from Syria – aged just 14 when he was elevated to power in 218 CE – he placed the sun god Elagabal at the head of the established Roman pantheon, engaged in orgiastic rituals, took male and female lovers, wore feminine dress and prostituted himself in taverns and even inside the imperial palace.

Since his assassination by Praetorian Guards at the age of 18, Elagabalus has been an object of fascination to historians and a source of inspiration for artists and writers. This immensely readable book examines the life of one of the Roman Empire’s most colourful figures, and charts the many guises of his legacy: from evil tyrant to firebrand rebel, from mystical androgyne to modern gay teenager, from decadent sensualist to ancient pop star.

A sample chapter can be read here: The Rejected Ruler

The following is a list of academic studies dealing with character assassination. More readings will be posted, so be sure to check often.