Reporting from the Executive Mansion

February 1 was not a regular Wednesday morning for Fareeha Rehman. Instead of preparing for her afternoon classes or catching up on her work as the online editor for Mason’s student-run newspaper, the Fourth Estate, she was driving south on I-95 heading for Richmond. She and fellow communication major, Lottye Lockhart, wouldn’t be waiting in line for lunch in the Johnson Center as usual; today, they would be enjoying a three-course meal in the Executive Mansion as official guests of the Governor himself.

Rehman and Lockhart had been selected by the Office of Student Media to represent Mason at a luncheon for college reporters with Governor Terry McAuliffe and several members of his staff. They were joined by a dozen other student journalists from public and private universities across the state. Together they worked through their nervous anticipation and the delicate balance of trying to take notes while eating from fine china and made the most out of this rare chance to get face time with the state’s highest elected official.

The Governor began the luncheon with his planned remarks, including his opposition to President Trump’s January 27 executive order blocking the entry of immigrants arriving from seven majority-Muslim countries, student loan reform, and encouraging young voter turnout. Then he and his staff opened the discussion to the group of college reporters for questions. 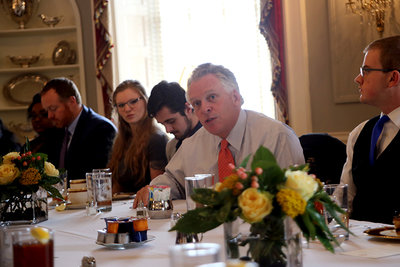 Even though Rehman was the designated “reporter” for the Mason contingent, both students were able to ask questions during the discussion and participate in the meet-and-greet after the meal. Rehman said she was most pleased they were treated like official members of the press throughout their visit. She felt the Governor’s office clearly viewed the college reporters as a critical link to a specific audience they hoped to connect with and inform. Rehman reflected on the day, saying, "I'm so grateful to the Office of Student Media for giving Lottye and I this opportunity. It was a valuable experience to be able to speak with the Governor about issues affecting college students." 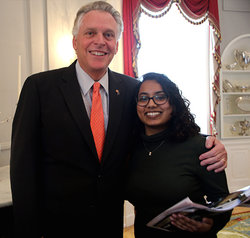 After their successful visit at the Executive Mansion, Rehman and Lockhart made the long drive back up I-95 in time for most of their classes that day. After hours in the car, an exciting luncheon with the Governor and a couple hours of class, Rehman’s Wednesday still wasn’t over. She was the reporter after all and she had a story to write!

You can read Rehman’s coverage and Lockhart’s photos from the event on the Fourth Estate website.