Our 24th Annual Communication Undergraduate Awards Ceremony was held on April 11, 2015 in the Pilot House at George Mason University’s Fairfax campus. While the participants devoured delicious appetizers and desserts ordered from Mason Catering, our featured speaker, Patrick Delaney, Outstanding Undergraduate Alumnus of the Year, began his speech. Patrick gave a wonderful testament about the amazing opportunities his Mason communication degree has given him and had the entire crowd (of 100!) hooked. Once he finished, our students received their awards. At the very end of the ceremony, Professor Susie Tomasovic held her annual Lambda Pi Eta Induction, bringing 18 new students into the LPE fold.

Our phenomenal undergraduate student award winners for the 2014-2015 semester are:

Broadcaster of the Year: Benjamin Simpson

Announcer of the Year: John Barnes 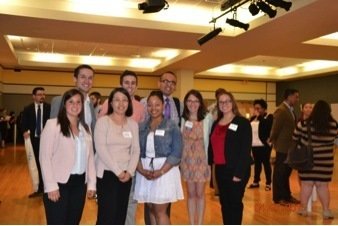 Every spring, the College of Humanities and Social Sciences hosts an Undergraduate Research Symposium. The symposium is a forum for undergraduate students to showcase their scholarship and creative activity.

All undergraduates with a major in the College of Humanities and Social Sciences are eligible to participate. They are invited to submit proposals, which can be class projects or independent work being done under the supervision of a faculty mentor. The best proposals are selected for inclusion in the symposium via a competitive process.

Congratulations to all of our students on their impressive work and a special congratulations to communication major, Karla Ponciano, for winning the Outstanding Poster Presentation for her research paper, "Relational Dissolution: Can It Take a Knapp?” 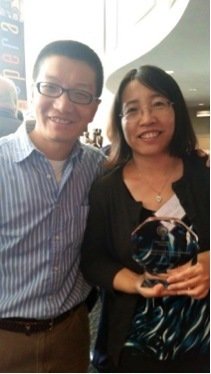 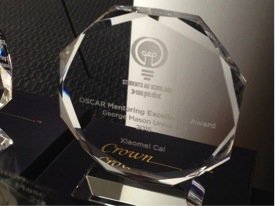 Congratulations to Dr. Xiaomei Cai for winning the OSCAR Mentoring Excellence Award. She is truly amazing and we are so proud to have her with us.

Dr. Cai was recognized at the Celebration of Student Scholarship on Tuesday, May 5, 2015 in the Center for the Arts. Everyone (students, faculty, staff) was invited to show their support and appreciation for Dr. Cai and all the winners. 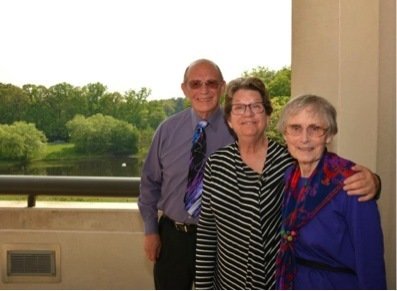 On May 8, 2015, faculty, students, alumni, and staff from the communication department, College of Visual and Performing Arts, Student Video Center, and Film and Video Studies (FAVS) program, gathered together to join in celebrating Dr. Cindy Lont as she retired from the university after 31 years (1984-2015). At this celebration, several long-time colleagues told stories about Dr. Lont, who then delighted the crowd with a series of video out-takes from her many educational projects at Mason.

Dr. Lont’s career at George Mason University has focused on dedicated service to its educational mission. She has also provided exceptional service to our discipline’s educational mission. She has produced, written, edited and/or appeared in approximately 20 videos designed for classroom use. She taught the very first distance education course in communication at Mason, using broadcast video. She was selected by the National Communication Association to produce and direct the 2005 Past Presidents Project of interviews with association presidents. Studio A, a program of interviews with filmmakers that she produced with GMU-TV for 6 years (2007-2013), generated over 60 shows and was honored with nine awards, including the Gracie Award from the American Women of Radio and Television in 2008.

Dr. Lont has also served in numerous Mason leadership roles, including chair of the Department of Communication, director of the telecommunications graduate program (now the MA in communication), founding director of the FAVS BA program, founding director of the FAVS concentration in the master of interdisciplinary studies program, director of the Student Video Center, director of the Student Technology Assistance and Resource (STAR) Lab, GMUView (yearbook) advisor, and WGMU radio station advisor.  In her faculty function, she has served nine programs at George Mason University and has played significant leadership roles in the development of six new programs. She assumed vital leadership positions in the Department of Communication (e.g., chairing important committees such as curriculum or promotions and tenure). She also served on faculty senate and on countless committees at the college and university levels.

In addition, Dr. Lont has served as president of the Eastern Communication Association and was active in the Virginia Association of Communication Arts and Sciences, including coordinating its student film festival. She has been honored with numerous teaching and mentorship awards. In addition to scholarly journal publications, conference papers, and creative works, she authored three textbooks—one of which received three excellence awards. She has served our national and regional professional associations in a variety of governance positions, served on editorial review boards for several scholarly journals, and actively engaged in community service.

Our fifth annual Graduate Awards Ceremony was held on May 14, 2015 in the Research I building on Mason’s Fairfax Campus. Our featured speaker, Outstanding Graduate Alumnus of the Year, Lindsay Hughes, was unable to attend the event due to a commitment that took her to Frankfurt, Germany, but we were able to read a lovely tribute in her honor about the success she has had using her communication degree. While we ate our appetizers, our students were presented their awards. We also were able to celebrate the graduation of three doctoral students, Dr. Jordan Alpert, Dr. Mollie Canzona, and Dr. Wan Lin Chang. Seven of our students plan to defend their theses and graduate with their PhD’s in the summer 2015: Yuxiang Du, Christy Forrester, Allison Harper, Hyun Oh, Justin Rolfe-Redding, Neil Stenhouse, and Kristen Willett.

Our phenomenal graduate student award winners for the 2014-2015 semesters are:

A special thanks to Ryan and Dave from Mason Catering who helped us immensely before, during, and after our event. We appreciate your hard work, dedication, positive attitudes, and professional demeanor.